It's especially interesting and gratifying to see the kids
- take concepts or techniques that they learn and use them in real life
- observe others doing similar things and point out the differences; and
- extrapolate what they've learned into new situations (and then explain it to you!).

Part of this is being able to apply the "Lego blocks" of our training, but a lot of it is their innate curiosity and plasticity of mind, and the adaptability of youth.

Training
We take children as young as four years old, providing they have the attention span and focus to deal with the training. (And yes, a four-year-old does have an attention span - but we won't make him (or the eight-year-olds) do the same thing the entire class!) We also have had and currently have training children with varying degrees of ADHD and autism spectrum disorders. All the students are held to the same standards, which requires us as instructors to pay attention to the group as a whole; set behavioral and safety boundaries that the children can understand (no pancakes!); and inform them of and enforce the consequences for crossing those boundaries (a time-out, and a discussion of why they received it - which they're able to say on their own 99% of the time).

Using techniques in real life
At least two of our youth students have used a wrist grab release. On the playground, the child who had grabbed our student grabbed another after our student freed herself and ran away. When telling the story, our student pointed out that the second child was unable to break free, since she did not know the release. (Asked for a name for this technique, the consensus among the students has been "the broken O".)

Observing others, noting differences
One student came in one evening and said he'd observed another child (not at dojo) demonstrating "power punches". He noted that the child was only using his arms, and had not been using his hips at all to add power to the punches (he said, as he demonstrated the proper form!).

Extrapolation
Introduced to new self-defense situations, several of the students have taken techniques they already know and adapted them or combined more than one to respond to the new situation. Sometimes the new techniques require a little tweaking - sometimes not! They're able to learn and recognize which "Lego blocks" will work when, and which won't work (and why).

Sponges
Mention something once and forget you've mentioned it, and odds are that you'll hear it back or see it when you least expect it - and in the correct context! Little pitchers etc...

But they are still kids...
Of course, we do periodically get the "hey, I could jump up in the air, spin around three times, and...!" responses along with the "good" self-defense ones, and the "but what if a gorilla came in here and..." questions. Within reason, we may let the child attempt a defense technique s/he has thought up, because sometimes the idea is a good one. Other times the basic idea may be sound, but it may need some refinement to work properly. At other times... well... let's just say there won't be any levitating classes added to the schedule anytime soon...

We do, however, teach them to become invisible. Seriously.

"No pancakes"?
That's shorthand for don't wander around the mat, don't walk behind other groups who are training (always walk near the wall), and pay attention to what you and the others are doing - i.e. anything that could be a safety issue. If you don't, you'll get pancaked! Pancakes are good for breakfast, and sometimes lunch and dinner (and potlucks!), but not on the mat.

That's why this is on the wall: 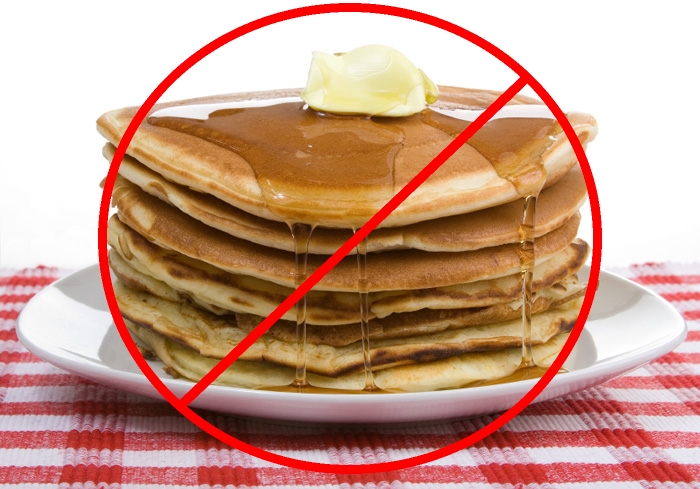